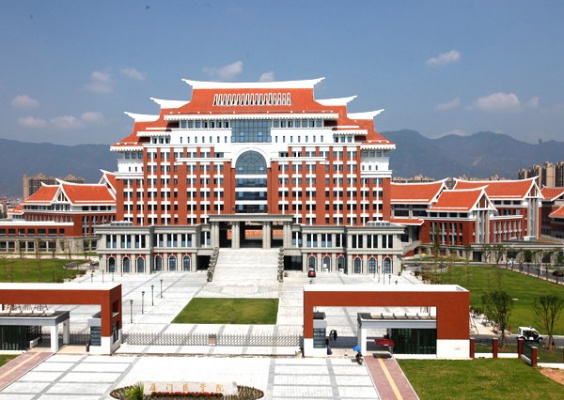 Xiamen Medical College is a century-old school with profound historical accumulation, which can be traced back to the medical institute set up in 1898 as an affiliation of Hope Hospital in Gulangyu Island and the nursing school founded in 1924. After being officially approved by the National Ministry of Education in March 2016, Xiamen Medical College has ungraded into a full-time, public college with new leadership and location from its former junior college status entitled Xiamen Medical College. After its upgrade, the new party leadership took office on June 19th, 2017.  With its century-long development, the school has spared no effort in cultivating students’ moral character as well as enriching their knowledge, in the belief that good character leads to a full-grown person, and good skills lead to a successful career. As a result, it has cultivated a large number of talents with high quality and high employment rate in the healthcare industry. In the new era, based in Xiamen and being oriented toward Fujian Province and even the whole country, Xiamen Medical College will shoulder heavy responsibilities to commit herself to cultivating applied and technical talents for healthcare industry, biological medicine and health service industry.

Xiamen Medical College is situated in Jimei District, Xiamen, hometown of Tan Kah Kee，a well-known patriotic overseas Chinese leader honored by Comrade Mao Zedong as the “Flag of the overseas Chinese and Glory of the nation.” Surrounded by the mountain and adjacent to the sea, the college owns a beautiful campus with a ground area of 33.3 hectares and a floor area of 190,000 square meters. The total value of its teaching and research equipment amounts to 200 million RMB. There are also about 500,000 paper books in the library.

The faculty has been fully enhanced. There are 2254 teaching staff, administrative staff and medical staff in total (including staff of two affiliated hospitals under its direct supervision). There are 293 full-time teachers, of whom 30 are professors, 64 associate professors, 86 with a Ph.D. diploma, 155 with master degree, 148 with two specialties and 83 part-time teachers. In terms of percentage, professors and associate professors account for 32.1% of the full-time teachers, those with master degree or above 82.3% and teachers with two specialties 50.5%. The college has employed one expert enjoying the special allowance of the State Council, who was selected for New Century Talents Project at national level, and awarded New Century Excellent Talent of Ministry of Education, director of key laboratory co-established by Ministry of Education and the Province, academic leader of State Administration of Traditional Chinese Medicine of the People’s Republic of China, national March 8 Red-Banner Holder, Model of National Teachers with Good Virtue, province-level talent of Double-Hundred Plan, Outstanding Scientific and Technological Talent in Fujian Province, leading talent of Excellent Talents Project in Fujian Province and winner of May lst Labor Medal in Fujian Province, one province-selected expert, three province-level expert teachers, two province-level professional leaders, two New Century Excellent Talents in province-level College, eight distinguished young researchers from colleges and universities in the province, one municipal invited expert from Taiwan, and four Taiwanese teachers.

The development of research has accelerated. At present, the college has four department-level scientific research platforms, two municipality-level scientific research platforms and five school-level scientific research platforms. In recent five years, the college has undertaken 93 scientific projects, of which three are funded by National Natural Science Foundation, and nine are funded by the Provincial Natural Science Foundation, and 81 are supported by Municipal Science Foundations. With regards to content, 23 of the projects are cooperative horizontal ones, 62 are in the social sciences and funded by authorities above the municipal level, including five at the provincial level. The achievements of our projects include two Provincial Third-prize Awards for Technological Advancement, four Municipal Third-prize Awards for Technological Advancement, 60 patent rights and 41 copyrights, transference of four scientific and technological achievements, 316 papers in science and technology (70 of which are indexed in SCI), 160 papers in the social sciences, two applied technical engineering centers of province-level universities and colleges, one province-level R&D laboratory, one key laboratory of province-level universities and two municipal key laboratories.

The quality of talent training has steadily improved. The employment rate of our graduates has exceeded 99% for five years in a row. In 2017, students at school have participated in national and provincial vocational skills competitions and have achieved remarkable results, receiving 24 awards. The passing rate of our graduates in National Qualification Examinations in Clinical Medicine, Oral Medicine, and Nursing Science ranks in the forefront.

With new journey ahead in the new era, Xiamen Medical College will focus on one overall objective of building a regional first-rate application-oriented college that takes root in Xiamen, serves the local and owns its distinctive features, spare no efforts to prepare two major exams including the Qualification Examination for Medical Practitioners to be taken by the first undergraduates majoring in clinical medicine in 2020 and Qualification Evaluation for Undergraduate Education in 2021, complete three key tasks containing party building, general affairs (teaching, scientific research and medical treatment) and security and stability, cultivate talents with four virtues, that is, being loyal to the country, being filial to parents, being responsible to the job and being devoted to patients, and realize “five improvements”, namely, party building improvement, leadership improvement, solidarity improvement and overall level improvement. (Date updated on December 31st, 2017)